Running a transport company is more than just a job 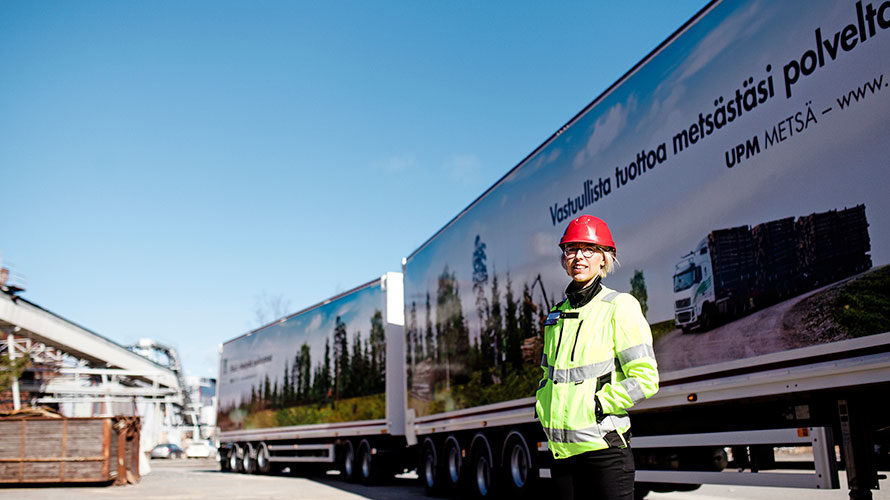 Kati Huhtala knows the UPM Seikku sawmill well. The sawmill, located by the Kokemäenjoki river near the centre of Pori, is a weekly destination for Huhtala's wood chip truck.

"Being an entrepreneur is not for everyone – just like a 9-to-5 job is not for others." Kati Huhtala's parents founded the Kuljetusliike Kalevi Huhtala transport company in 1982. When Kati was little, her father was often on the road and her mother took care of the company's paperwork in the evenings.

"The model I learned in those days from my parents about working was that when there is work to do, you do it, no matter what the clock or the calendar says."

Her father Kalevi Huhtala has been a trailblazer in developing new operating models, such as the use of High Capacity Transport (HCT) trucks. Huhtala's 34-metre articulated truck for wood chip transportation was designed in cooperation with UPM.

"It is great to be at the forefront of development. I would like to hear people saying in the future that it must have been the Huhtala company that introduced HCT trucks to wood chip transportation in Finland. UPM has been really actively involved in these reforms," Kati says.

Drivers have given positive feedback on the HCT trucks. According to them, the larger trucks have improved drivability and stability in comparison to traditional articulated trucks.

"Drivers line up to drive an HCT truck," says Kati, who has also participated in the test drives herself. The HCT trucks place less strain on the roads and the large transport volumes help reduce traffic.

"I can definitely see HCT trucks becoming common in the transport industry in the near future. The forest owner never sees the wood chip truck. We want to do our part to ensure that the logistics from the forest to the sawmill is equally smooth at this end of the process and at the harvesting sites."

Kuljetusliike Kalevi Huhtala Oy transports chips from UPM Seikku sawmill in Pori to UPM paper mill in Rauma. The total length of the HCT truck is 34 meters and the total weight when loaded 100 tonnes.

Koneurakointi Aki Sammalisto transports chips from UPM Korkeakoski sawmill to UPM's factories in Rauma, Kouvola and Lappeenranta with the new HCT truck. When the trailer under construction is completed, the total length of the articulated truck is 29.19 meters and the total weight when loaded up to 91 tonnes.

How do we cut CO2 emissions in transport?