With wood, football is set to score its most sustainable goal yet Often referred to as the ‘world game’, football is loved by billions across the planet. And now, football clubs are leading by example, setting in place sustainable trends that will resonate with fans.

A trip to see Forest Green Rovers play at their home stadium in Gloucestershire, western England, feels a bit different to most football matches. For a start, you won’t be able to buy a hot dog to eat at half-time, but you can try a vegan pie and a nut salad. In fact, just a few years down the line, you’ll be watching the match from inside a state-of-the-art timber stadium – “the greenest football stadium in the world”.

This ambitious plan was announced at the end of 2019 and will take a number of years to complete. Designed by Zaha Hadid Architects, it will be the world’s first stadium made entirely from wood, including its structure, roof cantilevers and louvred cladding.

“The importance of wood is that it’s not only naturally occurring, it has very low embodied carbon – about as low as it gets for a building material,” club owner Dale Vince said in a statement. “And when you bear in mind that three-quarters of the lifetime carbon impact of any stadium comes from its building materials, you can see why that’s so important.” Cement manufacturing produces large volumes of carbon dioxide, meaning alternative building materials such as timber are far better for the environment.

The stadium will also feature a transparent membrane covering the roof, which will encourage turf growth and on-site renewable energy generation. The club’s current site is on top of one of the steepest hills in the region, meaning walking or cycling is almost impossible, and club communications director Will Guyatt says they are looking forward to fans being able to take more environmentally friendly modes of transport to games: “We’ll have park and ride, we’re looking at ride-sharing, and also encouraging people to cycle along the canal to the venue.” 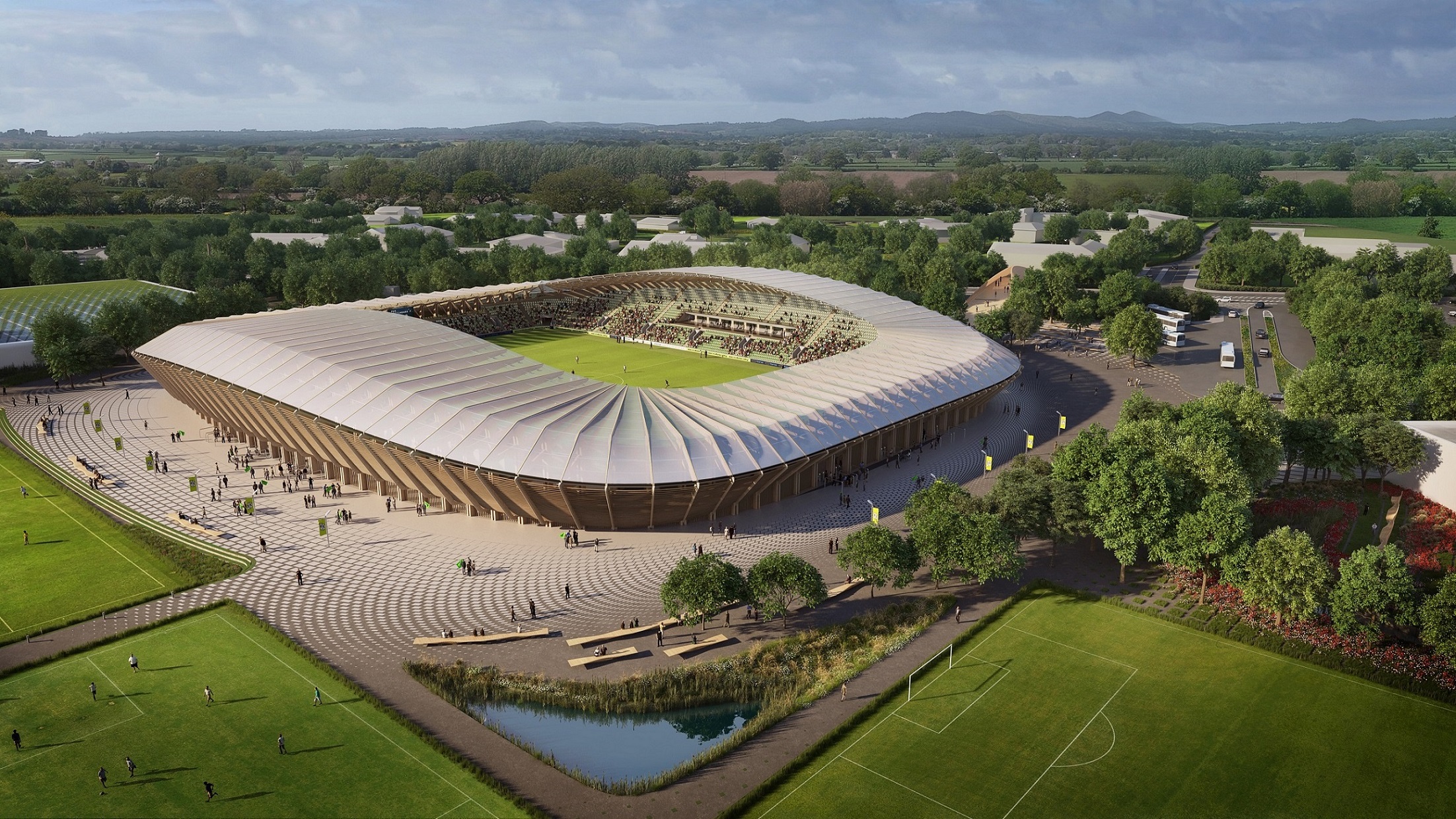 Embracing sustainability is something that football clubs around Europe are doing. Dutch giants Ajax have fitted a wind turbine and 4,200 solar panels to the 55,000-capacity Johan Cruyff Arena in Amsterdam. America-based franchise Atlanta United FC’s new stadium, meanwhile, will use 29% less energy than a traditional stadium and is located in an area that allows the majority of supporters to walk to the game and boasts its own water cooler that will collect rainwater for pitch irrigation.

While Forest Green Rovers are leading the way in the UK, sporting arenas made from glue-laminated wood could be a common sight across Europe in the coming years. As well as eliminating the need for heavy polluters such as concrete in their constructions, the main building material for these stadia also sequester carbon.

“The forest does not require any external form of energy to grow,” says architect Jaime Manca di Villahermosa of Bear Stadiums, an Italian-based company that is pioneering the building of such structures.

Football fans including these Atlanta United supporters may soon cheer for their teams from a sustainably-built stadium. Photo credit: Ronny Sison on Unsplash.

The pros and cons

Further advantages are that the structures can be constructed in less than six months, moved to different locations if necessary and the vast majority of workers can be unskilled and therefore found in the local area. This material is also entirely sustainable, requires little upkeep and, if done correctly, will fit into its surrounding in a far more aesthetic and natural manner.

However, there are, as with any building project, negative aspects of building with wood. At least 10 percent of people involved with the construction would have to be highly trained in the field, meaning they are harder to find. Also, the life expectancy of each stadium would be around 50 years – a hugely discouraging timeframe for clubs who would not expect to build a completely new home twice a century. Also, it would appear that these buildings would only be able to hold a maximum of 20,000 people at any one time, ruling out all of the continent’s bigger clubs. For perspective, of the 20 English Premier League clubs, only Bournemouth FC have a capacity under this figure at present.

Like it or not, football clubs are the heart and soul of many communities, with the players deemed as heroes by millions. Therefore, what they do is crucially important if they want their fans to take notice and follow their lead. Through their hard work, Forest Green Rovers are seeing a most welcome by-product of their green thinking. “A number of fans have told us they’ve put solar panels on their house, and some have bought electric cars,” confirms Guyatt. And in the macho world of football, that’s certainly nothing to be sniffed at.